“And let us consider how to stir up one another to love and good works, not neglecting to meet together, as is the habit of some, but encouraging one another, and all the more as you see the Day drawing near.” – Hebrews 10:24-25

If our recently concluded camp was made to be a MasterCard commercial, that would very well be its tagline.

I am mindful that some of us weren’t able to join the camp. I’m writing this not just to express my perspective about the camp, but also to give those who weren’t able to come a sense of what the Lord accomplished during that time.

Camps or retreats are a great investment in enhancing our church life by strengthening our relationships with one another. Our theme, “Feeling Right at Home”, emphasized this with conviction. After maneuvering through the thick Toronto traffic for over 3 hours, I arrived with my wife and our kids at sundown on Friday, August 21st. We were so touched to see Bro. Arnel Caballes in action – graciously putting the final structural checks to make sure our tent was on a solid and secure foundation. Yes, he did not just lend us a tent, but he also put up what would be our temporary 6-person, 3-day shelter all by himself. What an awesome feat of labour and love! Thanks, bro!

As people started arriving well after us, I saw that we were not the sole recipients of such charity. Everyone contributed and participated in a very Good Samaritan-like spirit in helping pitch tents. Soon enough, as darkness descended, the site soon became a village of GCF Peel campers noticeably beaming with an exciting anticipation of what was in store.

The colder than usual first night didn’t do much to dampen our desire to delight in each other’s company. A spontaneous dinner pot luck suddenly came on the scene, a sea of singers serenaded me for my birthday the previous day, and lively laughter conveyed a strong signal of how this camp would turn out. That was camp on the first day, and it was very good.

As radiant sunbeams pierced through the canopy of trees, resurgent campers started waking up one by one. Usual morning rituals drove each one to the nearby washroom; freshening up for a full plate of a sumptuous morning meal and a fully-packed day of activities. New campers and new friends started to arrive as well in the early morning. The big breakfast was followed by a 2-hour competitive scavenger hunt that brought most of the campers to their feet (or sometimes to their knees, depending on how much they had for brunch) hiking through the meandering woods of Lookout Trail. Challenges were introduced along the way, including singing to strangers, taking snapshots of local animal species – which at one point included stuffed animal toys in the gift shop in a desperate attempt to capture more on camera – and crowding inside one of the showers; that’s my team! The long, arduous hike quickly metabolized whatever meal that was consumed before then. What impressed me the most is that many of our young people who could have otherwise joined in the fun, instead stationed themselves for more than 2 hours to coordinate these challenges for the campers. It was a subtle, yet truly selfless act on their part. God bless your hearts! 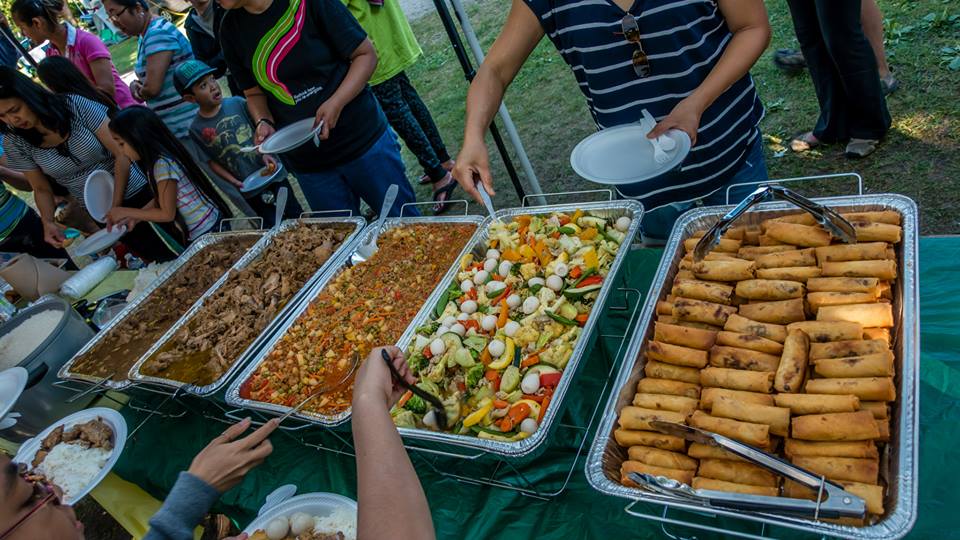 We then entered into the afternoon with an urgent desire to fill the few free hours with the much-deserved personal agenda. Others retreated into simple, friendly conversations, while some found the nearby lake-side beach a welcome oasis from the sweltering sun. Some found respite back in their tents for a reinvigorating afternoon siesta – investing some energy for the evening festivities.

And what a festival it turned out to be. Dinner was yet again a burgeoning buffet. God would never stop His people from worshiping Him that night. Park rangers came by when they saw musical instruments and audio equipment set up, issuing a friendly reminder to keep the noise down out of respect for the other campers. Being sensitive children of God, we took heed of their instructions and abandoned the idea of the amplified audio, but it turned out to be a blessing in disguise. The Holy Spirit knew no restriction in elevating and directing our hearts and spirits to praise the Living God; the one and only God who brought us all here in awe and amazement of the wonders that He has been blessing GCF Peel with in recent months. In hushed tones and the silent strumming of the acoustic guitar, we became a symphony of souls unto the Lord that night. That was the second day of camp and it was very good. 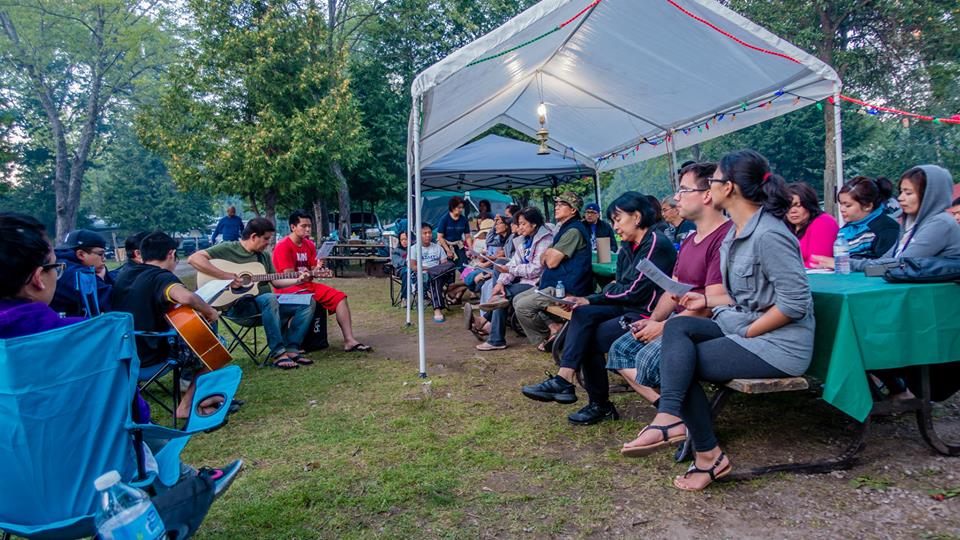 On the third day, it was obvious that some were already craving the comforts of home. The night was marked with another cold spell. Airbeds were starting to decompress. Mobile devices were losing charge. But brunch simply didn’t wane in abundance and fully met the campers’ appetite. Others started early packing up their gear to get ahead of the anticipated exodus home. But everyone gathered around again, faithfully committing themselves to another chance to congregate as a community commending themselves before the Almighty who made this enriching experience possible.

I’ve never felt more connected to my brothers and sisters at GCF Peel than that morning, especially when I delivered God’s word. All camp long I’ve been basking in the generosity, graciousness, and goodness of the fellowship marked with care and concern for one another. I thought an appropriate acronym for GCF during the camp to represent what we became for one another and what we hope to continue and commit to is “God’s Caring Family”. 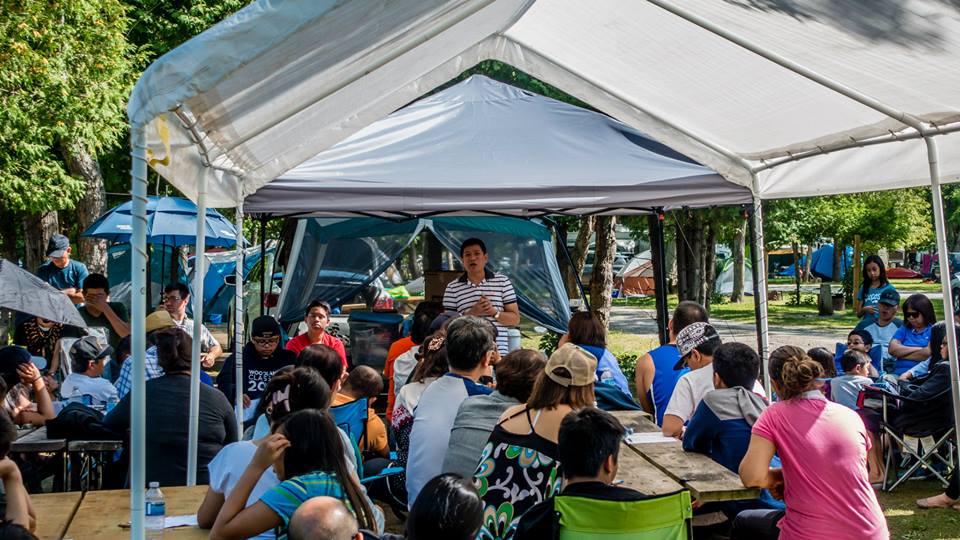 We were the last GCF Peel campers to leave that day owing to my inexperience in handling tents! But thank God again for you who helped me fold away Bro. Arnel’s palatial tent. The travel home was relatively shorter this time around.

It was late Sunday afternoon when we got home, but it felt like we never really left… 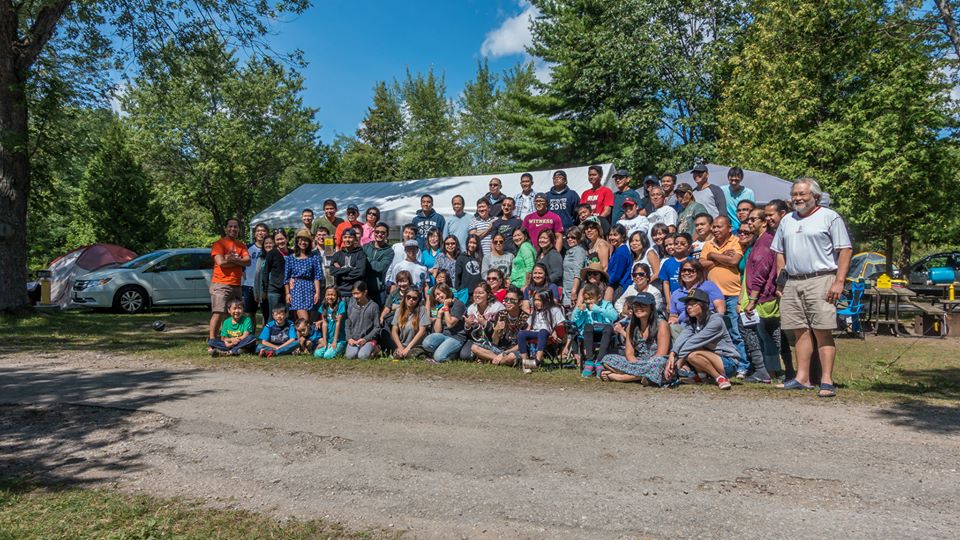